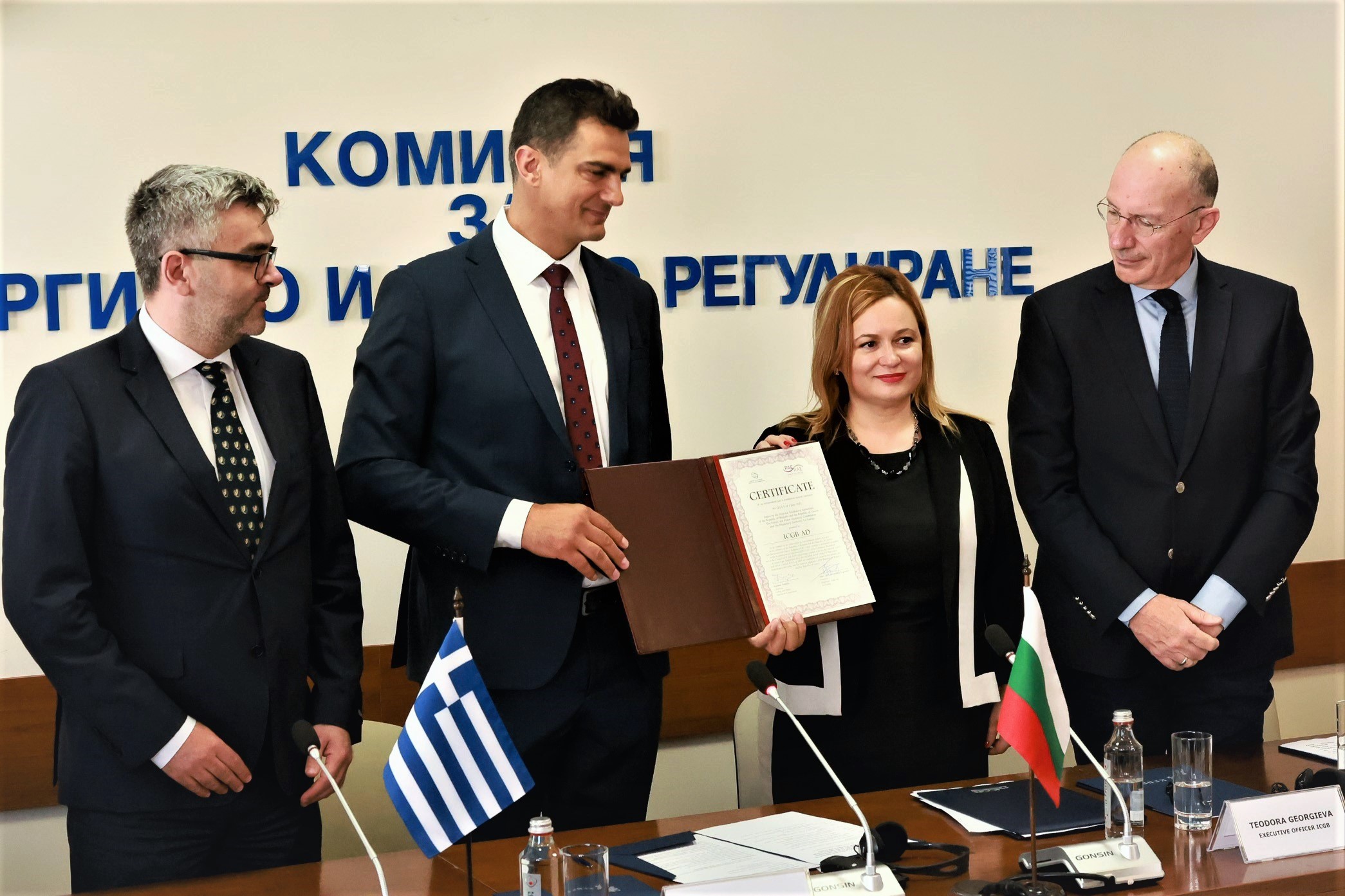 All regulatory requirements have been fulfilled with the adopted decision, for the gas interconnector Greece-Bulgaria (IGB) to be put into commercial operation, which is of strategic importance for the diversification and security of gas supplies for Bulgaria and South-Eastern Europe

The Chairman of the Energy and Water Regulatory Commission (EWRC), Stanislav Todorov, and the President of the National Regulator for Energy of the Republic of Greece (RAE), Athanasios Dagoumas, handed over the Final Joint Decision on the certification of ICGB AD. The Decision was handed to ICGB Executive Directors Teodora Georgieva and Konstantinos Karayanakos at a ceremony at EWRC. Ilin Stanev from the Representation of the European Commission in Bulgaria also participated in the event.

Official guests at the ceremony were the Chairman of the Parliamentary Committee for Energy Radoslav Ribarski, the Deputy Executive Director of BEH, Ina Lazarova, ICGB representatives.

„The start of the interconnector makes both Bulgaria and Greece and the whole of Europe more energy independent. With this decision, the energy regulators of Greece and Bulgaria guarantee that the Gas Interconnector IGB will provide free access to commercial companies from different countries and they will be able to supply natural gas to Bulgaria. It is evincible that large gas trading companies such as SHELL and Vitol have been already applying for a license in Bulgaria. This shows that today with the ICGB certification we are opening the Bulgarian market for supplies from all over the world and any company following the rules will be able to reserve capacity. And if the main question in the current situation is whether there will be enough gas for the winter months, with today's step we can answer that there will be gas supplies because they no longer depend on just one single source and one pipe."

By adopting the decision on the ICGB certification, the energy regulators of Greece and Bulgaria, together with the European Commission, create added value in the Balkans and Eastern Europe, because it is a project that unites our common interests and meets new challenges. By that step today, we couple the natural gas markets and end the energy isolation of the European countries. In the conditions of a very unstable world, the interconnector is also a kind of bridge between Bulgaria and Greece, which is beneficial both for our two countries and for the region.Thanks to the good relationship and interaction between the two regulators, the certification was accepted in a very short time and thus we contribute to the accelerated development of the gas market in the region and to the diversification of natural gas supplies.“

The IGB (Gas Interconnection Greece-Bulgaria) project is being implemented by the joint venture company ICGB AD, registered in Bulgaria in 2011, with shareholders BEH EAD (50%) and IGI Poseidon (50%). The co-shareholder IGI Poseidon is a company, registered in Greece, with shareholders being the Greek public gas corporation DEPA SA (50%) and the Italian energy group Edison SpA (50%). In accordance with its Articles of Association, ICGB AD will be the owner of the IGB gas pipeline and will finance its realization, will allocate its capacity and will receive the revenue from the transportation of natural gas.