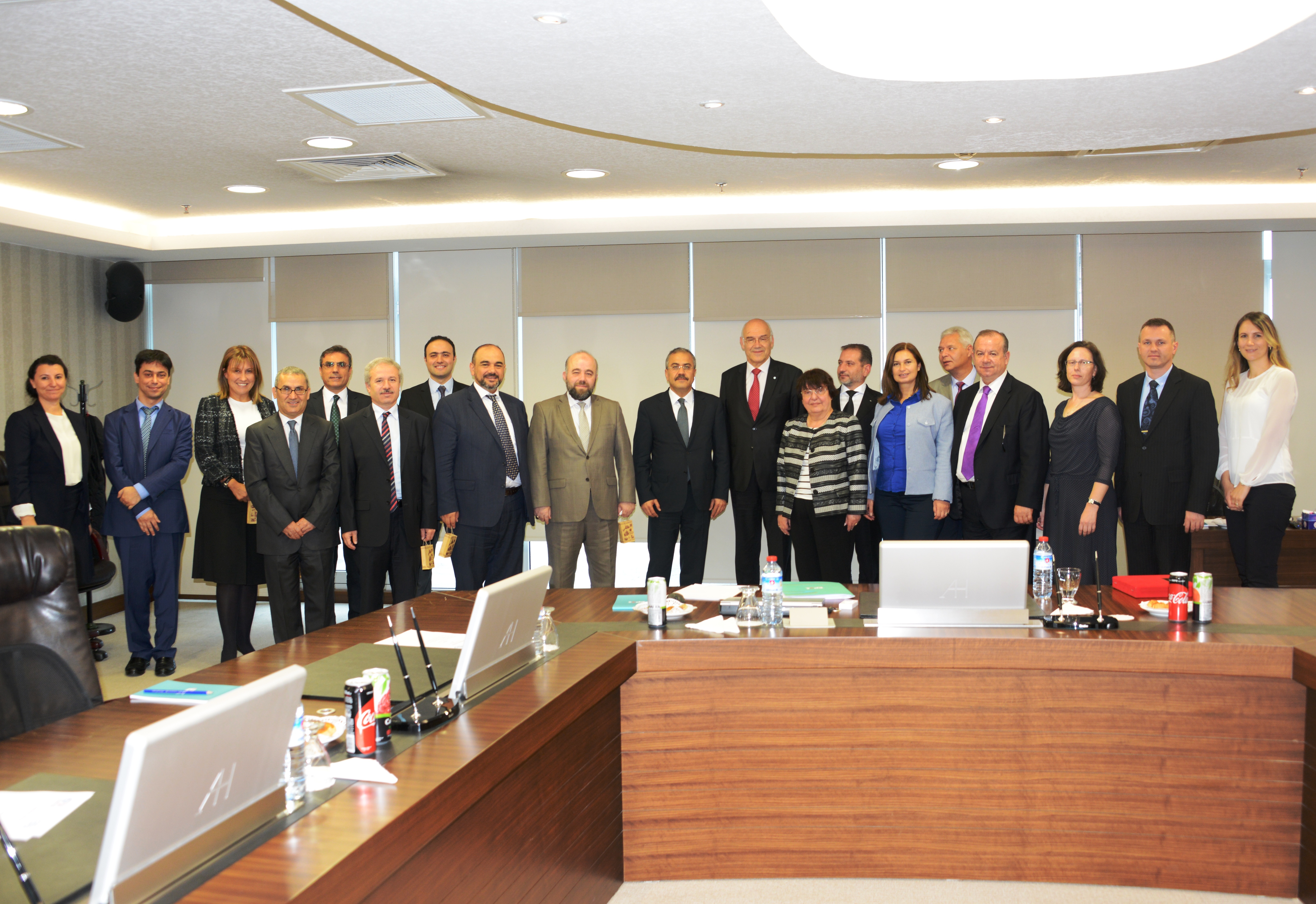 Meetings with the Parliamentary Committee of Industry, trade and energy, Energy Exchange Istanbul (EXIST) and the Organization of Black Sea Economic cooperation (BSEC) were also held

The Energy regulators of the Republic of Bulgaria and the Republic of Turkey support the signing of a bilateral Cooperation Agreement as an important step in establishing effective relationship between the two authorities. The document will create institutional legal framework for the exchange of regulatory practices and will contribute to enhancing the quality of regulatory activity. This opinion was shared by both EWRC Chairman Assoc. prof. Ivan Ivanov and EMRA President Mr. Mustafa Yilmaz during the discussions held at the headquarters of the Turkish energy regulator in Ankara. The chair of the Bulgarian Energy Regulator headed a delegation of EWRC, which made an official visit to Turkey in the period 25 – 27 Oct 2017. The delegation consisted of the regulator’s members Mrs. Evgenia Haritonova, Mr. Aleksandar Yordanov, Mr. Remzi Osman and Mr. Vladko Vladimirov.

At the talks, EMRA and EWRC delegations discussed topical issues related to the organization, functions and activities of the two regulatory bodies. A special place was devoted to their priorities regarding regulatory activity in the energy and natural gas sectors. Presentations were presented on topics including electricity and gas markets structure and the role of national regulators, the national development objectives of these sectors, as well as opportunities for accelerating the electricity and natural gas markets regional integration. EWRC member Aleksandar Yordanov presented the main regulatory aspects of the natural gas market in Bulgaria, with an emphasis on EWRC’s structure, functions and independence. He also paid special attention to the new EWRC regulations, defining the natural gas market framework and outlined the prospects for the Bulgarian natural gas market liberalization and integration into the European and regional market.

Good interaction between parliaments and national regulators plays an important role in adopting the necessary legal framework to ensure the implementation of effective regulatory functions in the energy field – that was the shared opinion at the meeting of the Bulgarian delegation with the chair and members of the Committee on Industry, Trade and Energy in the Turkish Parliament. EWRC chairman Assoc. prof. Ivan Ivanov underlined the role of energy regulators in ensuring equal treatment for all stakeholders in the sector and striking a balance between the interests of energy companies and consumers. Turkish parliamentarians were briefed on the successive efforts of EWRC to establish an active practical relationship between energy regulators in the Balkans, for which the future cooperation agreement with the Turkish energy regulator EMRA would play an important role. The Turkish side highly praised the bilateral relations in the energy sector and highlighted the importance of the two power interconnections between Turkey and Bulgaria as well as of the renewable energy projects and the exchange of know-how.

EWRC delegation visited the Energy Exchange Istanbul as well, where discussions were held with the Board member Mustafa Karahan and executive managers in operations and strategy development. Current issues of organizing the exchange power trading and future natural gas trading were discussed, as well as practical problems in the transparency monitoring and control of the concluded transactions and prevention of market abuses. The representatives of the Energy Exchange Istanbul explained the electricity market structure in Turkey and its activity in the different segments and platforms. Since 2015 exchange trading is implemented in "day ahead" and "intraday" market segments and as of April 2018 the start of the natural gas trading platform is to be launched. A desire to establish closer contacts with the Bulgarian Independent Energy Exchange was expressed by the hosts, which would also contribute to the realization of joint projects of mutual benefit.

On the third day of the visit EWRC delegation held a meeting with the Secretary-General of the Organization for Black Sea Economic Cooperation (BSEC), Ambassador Michael Christides and Deputy Secretary General Ambassador Traian Chebeleu. The talks were also attended by the executive manager of BSEC in the Energy Sector Eduard Panoian, Rositsa Stoeva - executive manager, the General Consul in Istanbul, Mr. Angel Angelov and commercial and economic counselors from the Bulgarian Consulate. The BSEC management presented the organization's activity in the energy sector, including regional cooperation projects and the Green Energy Network. One of the priorities is to create an integrated energy market in the Black Sea region, for which the interaction between energy regulators of BSEC member states has an important role. EWRC chairman Ivan Ivanov stressed that Bulgaria was interested in deepening the cooperation between the member states within the BSEC energy and water sectors working groups. In his view, the idea of establishing a Forum of the BSEC Member States Energy Regulators could be beneficial to regional cooperation in the field of regulatory practices.

The completed visit to Turkey is a continuation of the EWRC policy to expand and intensify the cooperation with energy regulators in the Balkan region. The Commission has already signed bilateral cooperation agreements with the energy regulators of Romania, Greece, the Republic of Macedonia and Montenegro, as well as with the Kosovo and Albania water regulators.